Zina Diantha Huntington was a plural wife of the Prophet Joseph Smith. 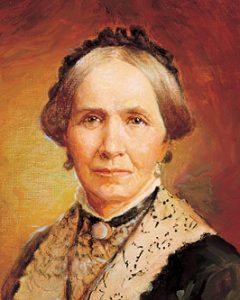 Taken from the Nauvoo Diary of Zina Diantha Huntington (Jacobs)

To read more from the diary of Zina D. Huntington, please visit “The Nauvoo Diary of Zina Diantha Huntington Jacobs” on the Joseph Smith Forum References.

“Joseph[‘s] Lawyers endeverd to make them secure. Done all in there power for there safety, especially Lawyer Read.9 O the ever to be r[em]embered awful day of the 27 of June 1844. The men of Carthage drove off some of the Bretheren at the point of the bayonet and swore they would kill Joseph. The Goviner knew of it yet he left them in the gale [jail] (with a light g[u]ard), took a number of men, came out here. About the time they arrived here in Nauvoo the awful s[c]ene took place. About 100 or 100[?] men with painted Faces burst open the gale [jail] dore. Shot in. (No man entered the room.) Joseph discharged three of the barrels of a six shooter. Hirum was shot first in the head or under the left eye. Shod [shot] Joseph through. He leaped from the upper window of a 2 story bilding. Br[other Willard] Richards started to Follow him but seed [seeing] that he must fall uppon the enemes bayotel [bayonet?], desisted. Brother Talor [John Taylor] is wounded. By the meraculous hand of God br. Richards was not hurt, for the bullets flew like hail in A violent storm. They ware both shot twice. Thus in one day about 3 or 4. oclock fell the Prophet and Patr[i]arch of the Church of the Lat[t]erday Saints, the kind husbands, the affectionate Father, the venerable statesman, the Friends of man kinde, by the hand of a ruthless Mob mixed with desenters. O God how long before thou wilt avenge the innosent blood that has be[e]n shed? How long must widdows mourn and orp[h]ans cry before thou wilt avenge the Earth and cause wickness to seace [cease]. Wilt thou hasten the day, O Lord, in thine own way. Wilt thou Prepare me and to stand all things and come of[f] conqerrer through him who hath Loved us, and give me a seat in thy selestial Kingdom with the Sancitified. I ask these favors for thy son Jesus sake, amen.“

“This after noon the Bod[i]es of the Marters arived in town. I went herd the speeches m[a]de by our bretheren and Friends. They stood where Joseph last stood and addresse[d] the bretheren, or he called them sons.10 Went into his house for the first time and there saw the lifeless speechless Bod[i]es of the towo [two] Marters for the testimony which they held. Little did my heart ever think that mine eyes should witness this awful seen [scene].“

“The People of the City went to see there beloved Prophet and Patriarch who had laid down there lives for the cause and there Bretheren. The night after the bretheren ware buried we had an awful thunder storm and lightning, so the mob did not come as they intended.”

“I thank Thee Heavenly father for thy protecting care and ask Thee to continue it unto us and Thy Name Shall have all the honors and glory. Helpe me to spend this year to thy honour and glory more than I have ever Done. O may I improve in all goodness, uprightness, Purity, Holiness until I through the worthiness of my Master Jesus I may be a fit temple for the Holy G[h]ost to Dwell in. Sister Gleson spent the day with me.”

“Went over to my Br Wms. Stayed all night. Dreamed of seeing Joseph Smith. I Did not think this was my birthday. This pleasent day I am 24 years old.“

“O thou God of My Fathers, even of Joseph, hear thou my Prayer even this night For my Kindred in the flesh. Let them rise, and not fall from this time that they may Honer and Glorify thee, Father which is in Heven, and thy name shall have the Honer and Glory, amen. Norman Buell and Wife arived here from Lima. I was happy to see them. Sister Fulton called.“

“All of our Family attended Meeting at the Stand. Most excelent instruction. It was the largest Congregarion that has ever ben assembled in Nauvoo, but is now called the City of Joseph. O Lord may the name ever stand and the City increase until all things shall be accomplished, this is the desire of rhy Hand Made [maid], O Lord my redeemer. And as we have heard Thy Word the time that the Lamanites shall be converted, Israel Gathered, Jerusalem shall be rebuilt. Hasten thy work O Lord in its time, and may I be prepared to receive all Thy Words and Obey them, even thy Celestial Law and thy Name shall have the Honour and Glory. High winds and the air filled with dust.“

“I called to see Sister Eliza Snow. She has ben confined to her be[d] 5 weeks, but O the patience. She is worthy of imitation. She is at E[l]der S Marcums [Stephen Markham], a fine family. I went with sister [Patty] Sessions to br Geens Funeral. Pres B Youngs spoke. May I never forget the words that fell from his lips. He spake of the power the Saints would have over disease, The fall of the Earth, its redemption, also all those that ware destined to this planet or world. Br Neel and son ware there from the state of N[ew] Y[ork].”

One Year ago to day Joseph and Hirum Smith left for Carthage, a day never to be forgotten in the anels [annals] of History, ne[i]the in the bosoms of the saints. A foundation of sorrow was then laid.