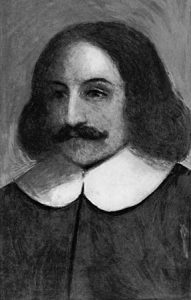 He was indeed a person of a well-tempered spirit, or else it had been scarce possible for him to have kept the affairs of Plymouth in so good a temper for thirty-seven years together…. The leader of a people in a wilderness had need be a Moses; and if a Moses had not led the people of Plymouth Colony, when this worthy person was their governour, the people had never with so much unanimity and importunity still called him to lead them.He was a person for study as well as action; and hence, notwithstanding the difficulties through which he had passed in his youth, he attained unto a notable skill in languages…. He was also well skilled in History, in Antiquity, and in Philosophy; and for Theology he became so versed in it, that he was an irrefragable disputant against the errors, especially those of Anabaptism, which with trouble he saw rising in his colony…. But the crown of all was his holy, prayerful, watchful, and fruitful walk with God, wherein he was very exemplary. 1

See his book, Of Plymouth Plantation, for further details

See also, Plymouth in the Words of her Founders

Learn about the early foundations of america in the DVD, For Our Day: Covenant on the Land