VERBAL STATEMENT OF BP. DENNISON L. HARRIS Of Monroe, Sevier Co., Utah, made by him to President Jos. F. Smith in the presence of Elder Franklin Spencer, at the house of Bp. Dorius of Ephraim, Sanpete Co., Utah, on Sun- day Afternoon, May 15th, 1881. Reported by George F. Gibbs. 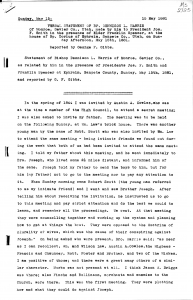 Statement of Bishop Dennison L. Harris of Monroe, Sevier Co., as related by him in the presence of Presidents Jos. F. Smith and Franklin Spencer at Ephraim, Sanpete County, Sunday, May 15th, 1881, and reported by G. F. Gibbs.

Bro. Harris then related the following circumstance in connection with Joseph’s giving the Twelve their endowments: “This little circumstance took place a few months after the thing I have related – perhaps it was two or three weeks, I do not now remember, I did not rivet dates on my mind. I was passing Joseph’s brick building which was used for a store,130 when Bro. Willard Richards came out and beckoned me. As we approached each other he said, Good morning Brother Harris! And shook hands with me. I was on my wagon, and I thought as though he wanted to chat. He walked along, and I drove on, he walking alongside of my wagon. It was an ox team I had but I asked him if he was going my way, and if he would ride. He said, Yes, if you please. He got up and rode. As soon as he was seated in the wagon he said, I have a message for you: Bro. Joseph wanted me to come and see you. As soon as he saw you coming he remarked – There, brethren, we are alright now; the time has come; — — there is the man I want;131 /there’s the boy I can depend upon and trust. Brother Richards, will you go and see him and tell him what I want.” Then Bro. Richards told me that Brother Joseph had met in that building with most of the Twelve,132 and they had been waiting for some one that Joseph could depend upon to assist them. He then told me that Joseph desired me to drive around to the river where he (Bro. Richards) would meet me with barrels and buckets133 to assist him to get some water up to the [Page 46]-7-Verbal statement of Bp. Dennison L. Harris, cont’d: 15 May 1881   house in which the brethren had gathered,134 that Brother Joseph wanted to give them (the Twelve) their endowments.135 I went to the river according to request, and found Bro. Richards there with barrels and buckets. We loaded up the wagon, and drove up to the house the back way. The Twelve were on the poarch136 above with block and tackle with which they drew the barrels of water up. Bro. Joseph was with them and assisted. Bro. Joseph said to me: – This day I am going to roll this kingdom off my shoulders on to the shoulders of these my brethren, for them to preach the Gospel and gather Israel and build up the Kingdom upon the foundation which I have laid; for I shall not be known among the people for many years, or for 20 years; I am going to rest, and these, my Brethren the Twelve have got to preach the Gospel and gather Israel, etc.137 In answer to a question, Bro. Harris, said “Joseph was then addressing himself to me, while the Twelve stood around him, on the poarch. “He then said to me, You are the only witness on the earth138 to what I am about to do; I wanted you as a witness, and I have been waiting for you. Then turning to Bro. Brigham, he said, Brother Brigham when this Temple (the Nauvoo Temple) is finished will you see to the giving of this young man his endowments as I will give them to you today? Bro. Brigham answered: I will, Brother Joseph. Bro. Joseph remarked again I request you to do it. Bro. Brigham promised in his firm way that he would do it. Brother Joseph then told me that was all I could do for him, and I drove off. Bro. Young fulfilled his promise. When he was ready for me he sent Bro. Milo Andrus139 to inform me that Bro. Brigham would give me my endowments if I would go to the Temple.140 I went and received them.   N.B.   This statement was made under the following circumstances: Bro. Harris spoke to Bro. Jos. F. immediately before the forenoon meeting of Sunday saying that he would like to relate the foregoing to him; consequently an appointment was made, and Bro. Jos. F. asked me to be present to take what Bro. Harris might say in short hand. The time appointed was after the morning meeting. As the afternoon meeting had been announced to commence half an hour earlier than usual (so as to give Prest. Taylor and party an opportunity to make Moroni and Fountain Green that evening on their [way] home) the time at our disposal to hear Bro. H. also to eat dinner was not sufficient to enable [Page 47]-8-Verbal statement of Bp. Dennison L. Harris, cont’d: 15 May 1881   him to do justice to it. He told it in his own way and had to hurry at that. G. F. Gibbs, Reporter.
Share this post
Share with FacebookShare with TwitterShare with Google+Share with Pinterest