The Scottish National Covenant of 1638 was a contract or covenant with God signed by thousands of Scottish Christian men who swore to defend their freedom in direct defiance of a king who was abridging the religious liberty of the people.  The Covenanters demanded a free and independent Scottish parliament and assembly with limits to the King’s power, particularly in matters of faith.  The Covenanters also declared that the Kirk, or church, was severed from the King’s authority.

“There is even strong circumstantial evidence that the American founding fathers who drafted the Declaration of Independence and the Constitution actually referred to two antecedent Scottish documents. . . . In fact, a careful comparison of the Arbroath Declaration and the National Covenant against the Declaration of Independence and the Preamble to the United States Constitution readily reveals how the Americans used the words and concepts of the older Scottish documents as models for their momentous works.” (The Mark of the Scotts, Duncan A. Bruce, pg. 38-39)

The United States Declaration of Independence

Preamble to the Constitution of the United States 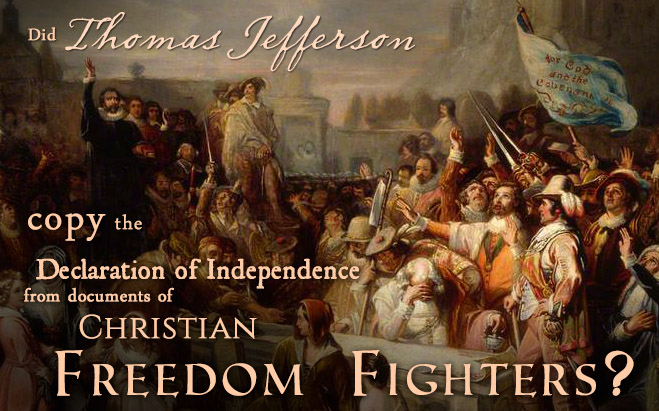 One thought to “The Scottish National Covenant (1638)”