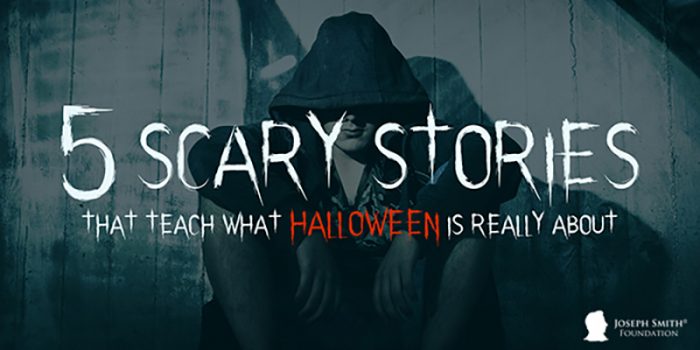 5 scary stories teaching what Halloween is really about

Blog, Doctrine (Blog)By Joseph Smith Foundation TeamOctober 10, 2016Leave a comment
The house “. . . was filled with evil spirits, who sought to destroy us . . .” –Wilford Woodruff (London, England) We three [Wilford Woodruff, Heber C. Kimball and George A. Smith] went into the City of London to undertake to open doors in that great city.  The first man who opened his doors…

“When we dedicated the Temple at Manti, many of the brethren and sisters saw the presence of spiritual beings, discernible only by the inward eye. The Prophets Joseph, Hyrum, Brigham and various other Apostles that have gone were seen and not only this, but the ears of many of the faithful were touched, and they heard the music of the heavenly choir.”

President Brigham Young I scarcely ever say much about revelations, or visions, but suffice to say, five years ago last July I was here, and saw in the spirit the Temple not ten feet from where we have laid the chief cornerstone. I have not inquired what kind of a Temple we should build. Why? Because it was represented before me. I have never looked upon that ground, but the vision of it was there. I see it as plainly as if it was in reality before me. Wait until it is done. I will say, however, that it will have six towers to begin with, instead of one. Now do not any of you apostatize because it will have six towers, and Joseph only built one. It is easier for us to build sixteen than it was for him to build one. The time will come when there will be one in the center of Temples we shall build and on the top, groves and fish ponds. But we shall not see them here, at present.

Articles (Wiki), Joseph Smith Articles (Wiki), Locations (Wiki), WikiBy wikiJanuary 9, 2013Leave a comment
Alberta Temple It was during the administration of President Joseph F. Smith that Bishop Charles W. Nibley was dispatched to Canada to consider the advisability of erecting a Temple and of selecting the best locations. Four pictures were taken of suggested locations. While making this report, the four pictures were laid before the President who…

Articles (Wiki), Locations (Wiki), WikiBy wikiApril 20, 2012Leave a comment
Associated Locations: Associated Dates: This articles covers the history and significance of the Kirtland Temple.  It covers the miracles, sacrifice and visions connected with this temple of the Restoration.

Articles (Wiki), Locations (Wiki), WikiBy wikiMarch 30, 2012Leave a comment
Inspiring Stories Heavenly Visitations Visions By F. T. Pomeroy, of Mesa, Arizona In the Pomeroy History, a footnote listed Richimir II as a descendant of Antenor, the King of the Cimmerians, who lived on the Black Sea, so in setting them down in my Temple Record, I left several lines between the two names and…

Articles (Wiki), Locations (Wiki), WikiBy wikiJanuary 14, 2012Leave a comment
Associated Locations: Associated Dates: I was just saying, brethren and sisters (Brother Woolley had finished speaking to the Saints in the Hawaiian language), that this land, the land of Laie, was one of the cities of refuge in olden times and I was telling them that now it is a city of refuge indeed, both to the spirit and body of man. William W. Cluff saw in vision President Young upon this land and talked with him, and President Young told him that “upon this land we will build a Temple unto our God.” Later on when President George Q. Cannon visited here, fifty years after the Gospel had been established, he told us, both at Laie and Honolulu, that the time would come when we would have a house in which to perform the ordinances necessary for the salvation of the living and the dead.

“I am going to bear my testimony to this assembly, if I never do it again in my life, that those men who laid the foundation of this American Government and signed the Declaration of Independence were the best spirits the God of Heaven could find on the face of the earth. They were choice spirits, not wicked men. General Washington and all the men that labored for the purpose were inspired of the Lord. Another thing I am going to say here, because I have a right to say it. Every one of those men that signed the Declaration of Independence with General Washington called upon me, as an Apostle of the Lord Jesus Christ, in the Temple at St. George two consecutive nights, and demanded at my hands that I should go forth and attend to the ordinances of the house of God for them. Men are here, I believe, that know of this—Brothers J. D. T. McAllister, David H. Cannon and James C. Bleak. Brother McAllister baptized me for all these men, and I then told these brethren that it was their duty to go into the Temple and labor until they got endowments for all of them. They did it. Would those spirits have called upon me, as an Elder in Israel, to perform that work if they had not been noble spirits before God? They would not. I bear this testimony because it is true. The spirit of God bore record to myself and the brethren while we were laboring in that way.
Search