Sylvia Sessions (Lyon) was a plural wife of the Prophet Joseph Smith. 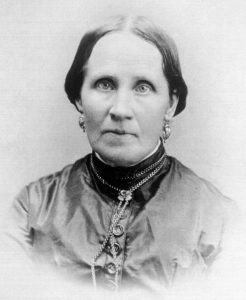 “[Patty [Sessions], interpreting,] said that God was well pleas’d with this [Relief] Society, that if we would be humble and faithful the Lord would pour out upon the members generally the gift of prophecy – that when the speaker laid her hand on the head of Sister Snow, she said that not only she should have the spirit but that all should have it also – that the speaker then address’d herself to mother Smith saying that the prayers of father Smith were now answered upon the members of the Society – that the days of Mother S. should be prolong’d and she should meet many times with the Society, should enjoy much in the society of the sisters & shall hereafter be crown’d a mother of those that shall prove faithful &c.” 1

“Just prior to my mothers death in 1882 she called me to her bedside and told me that her days on earth were about numbered and before she passed away from mortality she desired to tell me something which she had kept as an entire secret from me and from all the others but which she now desired to communicate to me. She then told me that I was the daughter of the Prophet Joseph Smith, she having been sealed to the Prophet at the time that her husband Mr. Lyon was out of fellowship with the Church.” 2