Mary Elizabeth Rollins was a plural wife of the Prophet Joseph Smith. 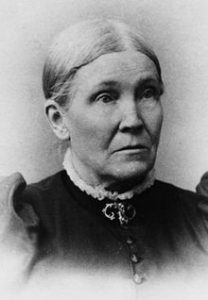 “The angel came to me three times between the year of ’34 and ’42 and said I was to obey that principle or he would lay [destroy] me.” 2

“I felt stunned [that Brigham Young left], the thought came to me that Poligamy was of the Devil – and Brigham knew it, or he would have cut off his right hand before he would have left me… I wept myself sick, and felt to give up, and go among the Gentiles in fact I felt as though I was like one in any open Boat at Sea, without Compass or Rudder.” 3

I was not sealed to him [Joseph Smith] until I had a witness. I had been dreaming for a number of years I was his wife. I thought I was a great sinner. I prayed to God to take it from me for I felt it was a sin; but when Joseph sent for me he told me all of these things. “Well,” said I, “don’t you think it was an angel of the devil that told you these things?” Said he, “No, it was an angel of God. God Almighty showed me the difference between an angel of light and Satan’s angels. The angel came to me three times between the years of 1834 and 1842 and said I was to obey that principle or he would slay me. . . .

Well, I talked with him for a long time and finally I told him I would never be sealed to him until I had a witness. Said he, “You shall have a witness.” Said I, “If God told you that, why does he not tell me?” He asked me if I was going to be a traitor. “I have never told a mortal and shall never tell a mortal I had such a talk from a married man,” said I. “Well,” said he, “pray earnestly for the angel said to me you should have a witness.” Well, Brigham Young was with me. He said if I had a witness he wanted to know it. “Why should I tell you?” said I. “Well,” said he, “I want to know for myself.” Said he, “Do you know what Joseph said? Since we left the office the angel appeared to him and told him he was well pleased with him and that you should have a witness.”

I made it a subject of prayer and I worried about it because I did not dare to speak to a living being except Brigham Young. I went out and got between three haystacks where no one could see me. As I knelt down I thought, why not pray as Moses did? He prayed with his hands raised. When his hands were raised, Israel was victorious, but when they were not raised, the Philistines were victorious. I lifted my hands and I have heard Joseph say the angels covered their faces. I knelt down and if ever a poor mortal prayed, I did. A few nights after that an angel of the Lord came to me and if ever a thrill went through a mortal, it went through me. I gazed upon the clothes and figure but the eyes were like lightning. They pierced me from the crown of my head to the soles of my feet. I was frightened almost to death for a moment. I tried to waken my aunt, but I could not. The angel leaned over me and the light was very great, although it was night. When my aunt woke up she said she had seen a figure in white robes pass from our bed to my mother’s bed and pass out of the window.

Joseph came up the next Sabbath. He said, “Have you had a witness yet?” “No.” “Well,” said he, “the angel expressly told me you should have.” Said I, “I have not had a witness, but I have seen something I have never seen before. I saw an angel and I was frightened almost to death. I did not speak.” He studied a while and put his elbows on his knees and his face in his hands. He looked up and said, “How could you have been such a coward?” Said I, “I was weak.” “Did you think to say, ‘Father, help me?’” “No.” “Well, if you had just said that, your mouth would have been opened for that was an angel of the living God. He came to you with more knowledge, intelligence, and light than I have ever dared to reveal.” I said, “If that was an angel of light, why did he not speak to me?” “You covered your face and for this reason the angel was insulted.” Said I, “Will it ever come again?” He thought a moment and then said, “No, not the same one, but if you are faithful you shall see greater things than that.” 4

In January [1842] . . . Brother Joseph and Brother Brigham came to see me and invited me to go the next day to his office in the Brick Store. I was surprised at this. He asked me if I was afraid to go? I replied, “Why should I be afraid of a Prophet of God?” He said Brother Young would come for me.

That night I dreamed I was married to him and occupied an upper room in a new house. In the morning, we were called to breakfast. And I wondered what Emma would say to me for I was afraid of her, but Joseph took me by the hand and led me down stairs, at the foot of which, stood Emma smiling at us and conducted us to the breakfast room.

I awoke then and did not know what to think of my dream. But on going to the office [the] next day, I received the interpretation for what to my astonishment, when Joseph made known to me that God had commanded him in July, 1834, to take me for a wife. 5

I said if the Lord told you such a thing, why doesn’t He come and tell me? Furthermore, I never would consent to be sealed to him,6 unless I had a witness for myself. He told me a great many things concerning the order and the blessings pertaining to it etc. I felt that he and I were both wrong for I had dreamed for years that I belonged to him; and had besought the Lord to take away such thoughts from my heart. No human being can tell my feeling on this occasion. My faith in him, as a Prophet about failed me. I could not sleep, and scarcely eat.

Next day, Brother Young came to see me, and said after we left the office, Joseph told him that an angel appeared to him, and told him that the Lord was well pleased with him and that I should have a witness that what he told me was true. I marveled at this, but made it a subject of prayer, night and day. One night in February I felt impressed to pray as Moses did in the battle of Israel with the Amalekites, by holding up my hands towards heaven. I also covered my head with a white cloth and I prayed with all my soul, that if the doctrine was true, to give me a witness of the same.

One night I retired to bed, but not to sleep, for my mind was troubled so sleep fled from me. My Aunt Gilbert was sleeping with me at the time when a great light appeared in the room. Thinking the kindling wood was on fire, that was spread on the hearth, I rose up in bed to look. When lo, a personage stood in front of the bed looking at me. Its clothes were whiter than anything I had ever seen. I could look at its person, but when I saw its face so bright and more beautiful than any earthly being could be, and those eyes piercing me through and through, I could not endure it. It seemed as if I must die with fear. I fell back in bed and covered up my head so as not to see it. I pushed Aunt very hard to have her look up and see it too. But I could not wake her and I could not speak. I thought if she were awake, I would not feel so afraid. As it is, I can never forget that face. It seems to be ever before me.

A few days after this Joseph asked me if I had received a witness yet. I said no. He said you soon will have, for the angel expressly told me you should have. Then I told him what I had seen, for I fully realized what I had lost by my cowardice. The family all said they knew something had happened to me, for my countenance was almost transparent. And when I told them of it, there was great rejoicing and they felt that I had been highly favored of the Lord. As yet they knew nothing of what Joseph had said to me.

When Joseph had enquired about the appearance of the person, and I had told him, he seemed much affected and told me that it was an angel from God and that it came for aught with more knowledge and revelation, than he dare reveal at that time. And that if I had prayed in my heart to God, all fear would have left me. As it was, Satan snatched the cup from my lips. He told me of many things to take place soon in my life. As a sign of the truth of what he had revealed to me, his words were verified to the letter. 6

I was sealed to Joseph Smith, the Prophet by commandment. In the Spring of 1831. The Savior appeared and commanded him to seal me up to Everlasting Life, gave me to Joseph to be with him in his Kingdom, even as he is in the Father’s Kingdom. In 1834, he was commanded to take me for a wife. I was a thousand miles from him. He got afraid. The angel came to him three times, the last time with a drawn sword and threatened his life. I did not believe. If God told him so, why did he not come and tell me? The angel told him I should have a witness. An angel came to me – it went through me like lightning – I was afraid. Joseph said he came with more revelation and knowledge than Joseph ever dare reveal. (Brigham Young sealed me to him, for time and all eternity 0 Feb. 1842). Joseph said I was his before I came here and he said all the Devils in Hell should never get me from him. I was sealed to him in the masonic Hall, over the old brick store by Brigham Young in Feb. 1842 and then again in the Nauvoo temple by Heber C. Kimball – reconfirmed in the St. George Temple, also the Manti Temple and the Salt Lake Temple after I came to Utah.7