Lucy Walker was a plural wife of the Prophet Joseph Smith. 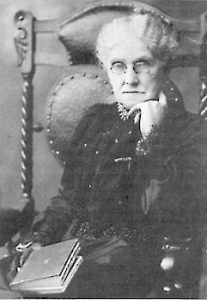 Below is an excerpt of the Lucy Walker Kimball Autobiography. To read the entire autobiography, click here.

In the year 1842, President Joseph Smith sought an interview with me, and said: “I have a message for you. I have been commanded of God to take another wife, and you are the woman.” My astonishment knew no bounds. This announcement was indeed a thunderbolt to me. He asked me if I believed him to be a prophet of God. “Most assuredly I do,” I replied. He fully explained to me the principle of plural or celestial marriage. He said this principle was again to be restored for the benefit of the human family, that it would prove an everlasting blessing to my father’s house, and form a chain that could never be broken, worlds without end. “What have you to say?” he asked. “Nothing.” How could I speak, or what could I say? He said, “If you will pray sincerely for light and understanding in relation thereto, you shall receive a testimony of the correctness of this principle. I thought I prayed sincerely, but was so unwilling to consider the matter favorably that I fear I did not ask in faith for light. Gross darkness instead of light took possession of my mind. I was tempted and tortured beyond endurance until life was not desirable. Oh that the grave would kindly receive me, that I might find rest on the bosom of my dear mother. Why should I be chosen from among thy daughters, Father, I am only a child in years and experience, no mother to counsel; no father near to tell me what to do in this trying hour. Oh, let this bitter cup pass. And thus I prayed in the agony of my soul.

The Prophet discerned my sorrow. He saw how unhappy I was, and sought an opportunity of again speaking to me on this subject, and said: “Although I cannot, under existing circumstances, acknowledge you as my wife, the time is near when we will go beyond the Rocky Mountains and then you will be acknowledged and honored as my wife.” He also said, “This principle will yet be believed in and practiced by the righteous. I have no flattering words to offer. It is a command of God to you. I will give you until tomorrow to decide this matter. If you reject this message the gate will be closed forever against you.”

This aroused every drop of Scotch in my veins. For a few moments I stood fearless before him, and looked him in the eye. I felt at this moment that I was called to place myself upon the altar a living sacrifice–perhaps to brook the world in disgrace and incur the displeasure and contempt of my youthful companions; all my dreams of happiness blown to the four winds. This was too much, for as yet no shadow had crossed my path, aside from the death of my dear mother. The future to me had been one bright, cloudless day. I had been speechless, but at last found utterance and said: “Although you are a prophet of God you could not induce me to take a step of so great importance, unless I knew that God approved my course. I would rather die. I have tried to pray but received no comfort, no light,” and emphatically forbid him speaking again to me on this subject. Every feeling of my soul revolted against it. Said I, “The same God who has sent this message is the Being I have worshipped from my early childhood and He must manifest His will to me.” He walked across the room, returned and stood before me with the most beautiful expression of countenance, and said: “God Almighty bless you. You shall have a manifestation of the will of God concerning you; a testimony that you can never deny. I will tell you what it shall be. It shall be that joy and peace that you never knew.”

Oh, how earnestly I prayed for these words to be fulfilled. It was near dawn after another sleepless night when my room was lighted up by a heavenly influence. To me it was, in comparison, like the brilliant sun bursting through the darkest cloud. The words of the Prophet were indeed fulfilled. My soul was filled with a calm, sweet peace that “I never knew.” Supreme happiness took possession of me, and I received a powerful and irresistible testimony of the truth of plural marriage, which has been like an anchor to the soul through all the trials of life. I felt that I must go out into the morning air and give vent to the joy and gratitude that filled my soul. As I descended the stairs, President Smith opened the door below, took me by the hand and said: “Thank God, you have the testimony. I too have prayed.” He led me to a chair, placed his hands upon my head, and blessed me with every blessing my heart could possibly desire.

The first day of May, 1843, I consented to become the Prophet’s wife, and was sealed to him for time and all eternity, at his own house by Elder William Clayton.

Today I have but one regret, which is that I have not been a more worthy representative of the principle of plural marriage, and that I have not lived a more perfect life. I can also state that Emma Smith was present and did consent to Eliza and Emily Partridge, also Maria and Sarah Lawrence being sealed to her husband. This I had from the Prophet’s own mouth; also the testimony of her niece, Hyrum Smith’s eldest daughter, (my brother Lorin’s wife), as well as that of the young ladies named themselves, with whom I was on most intimate terms, and was glad that they, too, had accepted that order of marriage. Instead of a feeling of jealousy, it was a source of comfort to me. We were as sisters to each other.

In this I acted in accordance with the will of God, not for any worldly aggrandizement, not for the gratification of the flesh. How can it be said we accepted this principle for any lustful desires? Preposterous! This would be utterly impossible. But, as I said before, we accepted it to obey a command of God, to establish a principle that would benefit the human family and emancipate them from the degradation into which they, through their wicked customs, had fallen.

Lucy Walker Smith Kimball being first duly sworn, says:I was a plural wife of the Prophet Joseph Smith and was married for time and eternity in Nauvoo, State of Illinois, on the first day of May, 1843, by Elder William Clayton. The Prophet was then living with his first wife, Emma Smith, and I know that she gave her consent to the marriage of at least four women to her husband as plural wives, and she was well aware that he associated and cohabited with them as wives. The names of these women are Eliza and Emily Partridge, and Maria and Sarah Lawrence, all of whom knew that I too was his wife.

When the Prophet Joseph Smith mentioned the principle of plural marriage to me I felt indignant, and so expressed myself to him, because my feelings and education were averse to anything of that nature. But he assured me that this doctrine had been revealed to him of the Lord, and that I was entitled to receive a testimony of its divine origin for myself. He counseled me to pray to the Lord, which I did; and thereupon received from Him a powerful and irresistible testimony of the truthfulness and divinity of plural marriage, which testimony has abided with me ever since.

On the 8th day of February, 1845, I was married for time to President Heber C. Kimball, and bore to him nine children. And in this connection allow me to say to his everlasting credit that during the whole of my married life with him he never failed to regard me as the wife for eternity of his devoted friend, the Prophet Joseph Smith.

Subscribed and sworn to before me, this 17th day of December, 1902.
Lucy Walker Smith Kimball.

The Prophet Joseph Smith often referred to the feelings that should exist between husbands and wives, that they, his wives, should be his bosom companions, the nearest and dearest objects on earth in every sense of the word. He said men should beware how they treat their wives, that they were given them for a holy purpose, that the myriads of spirits waiting for tabernacles might have pure and healthy bodies. He also said many would awake on the morning of the resurrection sadly disappointed; for they, by transgression, would have neither wives nor children, for they surely would be taken from them and given to those who should prove themselves worthy. Again he said, a woman would have her choice; this was a privilege that could not be denied her.

President Joseph Smith taught me the principle of plural marriage, which, after much serious thought and prayer for many months, I became convinced was a principle revealed from heaven. On the first day of May, 1843, I consented to become the Prophet’s wife, and was sealed to him for time and all eternity, at his own house, by Elder William Clayton.1