The Title Page of the Book of Mormon states that this record was “Written to the Lamanites, who are a remnant of the house of Israel” and that it is to be taken to the remnant of the seed of Lehi, to convince them that Jesus is the Christ.

Almost as soon as the Church was organized and the Book of Mormon was printed at the Grandin Press, the Lord, through the Prophet Joseph, instructed Oliver Cowdery (D&C 28:8), Peter Whitmer Jr. (D&C 30:5-6), Parley P. Pratt and Ziba Peterson (D&C 32:1-3) to go and preach the gospel unto the “Lamanites.” The multiple references in these sections makes it clear that the Lord knows who the “Lamanite” remnant of the Book of Mormon are and tells these missionaries that He himself will “go with them and be in their midst” as they go to the “borders of the Lamanites.” 1 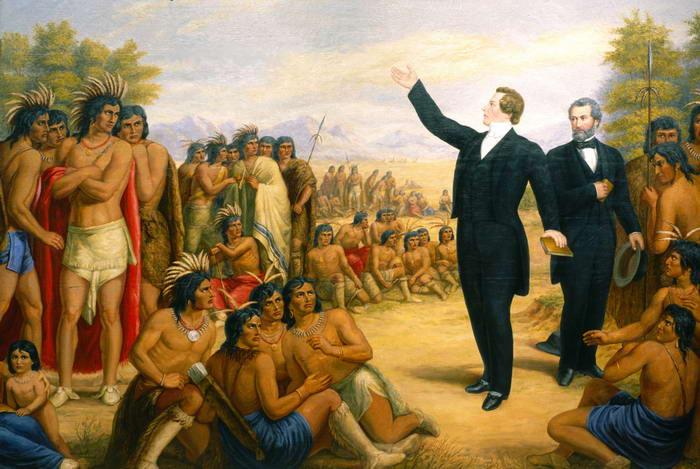 I guess you have seen the picture where Brother Joseph was preaching to the Indians. I was there at that time. The Indians were all kneeling down on the grass in front of the Mansion, and if you have seen that picture, that just describes the way everything was, though it is a miserable picture of the Prophet. He was a fine, noble-looking man, always so neat. There are some of the pictures that do not look a particle like him. When he was preaching you could feel the power and influence. 2