“I was innocent of crime, and . . . I had been abused and thrust into a dungeon, and confined for months on account of my faith, and the “testimony of Jesus Christ.” However I thank God that I felt a determination to die, rather than deny the things which my eyes had seen, which my hands had handled, and which I had borne testimony to, wherever my lot had been cast; and I can assure my beloved brethren that I was enabled to bear as strong a testimony, when nothing but death presented itself, as ever I did in my life. My confidence in God, was likewise unshaken. I knew that he who suffered me, along with my brethren, to be thus tried, that he could and that he would deliver us out of the hands of our enemies; and in his own due time he did so,for which I desire to bless and praise his holy name. From my close and long confinement, as well as from the sufferings of my mind, I feel my body greatly broke down and debilitated, my frame has received a shock from which it will take a long time to recover; yet, I am happy to say that my zeal for the cause of God, and my courage in defense of the truth, are as great as ever. “My heart is fixed,” and I yet feel a determination to do the will of God, in spite of persecutions, imprisonments or death; I can say with Paul [that] “none of these things move me . . . so that I may finish my course with joy.” 1

“We have nothing to be discouraged at, if we remember the words of the Savior, which say ‘in the world you shall have tribulation.’ . . . Let us not then think that these are strange things such as never happened before, but, rather let us take the prophets and saints in ancient days as examples.” 2

Mary Fielding Smith, after Hyrum escaped from jail in Missouri, wrote a letter in which she referred to the six months of his imprisonment as “six months, in widowhood, in the time of great affliction,” adding, “yet I do not feel in the least discouraged. . . . I have, to be sure, been called to drink deep of the bitter cup; but you know, my beloved brother, this makes the sweet the sweeter. . . . I feel but little concern about where I am, if I can but keep my mind staid upon God; for, you know in this there is perfect peace. I believe the Lord is overruling all things for our good. . . .I can truly say, that I would not give up the prospect of the latter-day glory for all that glitters in this world.” 3

“To those who have suffered bereavements,” he wrote, “I would drop the sympathetic tear, and would do all I could to comfort you in your distress, and would fain pour into your wounded souls, the oil of joy for mourning To the church in general I would say, be faithful, maintain your integrity, let the principles of truth and righteousness get deep hold in your hearts, live up to those principles at all times, be humble withal, and then you will be able to stand firm and unshaken tho’ ‘The mountains skip like rams, and all the little hills like lambs.'” 4

Our sufferings will only call to mind the sufferings of the ancients—Daniel in the lions’ den, the Hebrew children that were cast into the fire or furnace and the deprivations of the saints when they took joyfully of the spoiling of their goods at the time of the persecution at Jerusalem when the saints were scattered from that place. After these troubles leave us, they will fall on the world and they must perish without hope whilst we have a hope of everlasting life. We shall have joy when they have naughtbut sorrow if we fail not in hearkening to the strict word of God, for he hath said that he will make a full end of all nations whither he has driven Israel, but a remnant shall be saved; but a few, we may say, will be saved. We are frail mortals, worms of the dust, but remember that the grace of God is sufficient for us.” 5

“My son, Hyrum, I seal upon your head your patriarchal blessing, which I placed upon your head before, for that shall be verified. In addition to this, I now give you my dying blessing. You shall have a season of peace, so that you shall have sufficient rest to accomplish the work which God has given you to do. 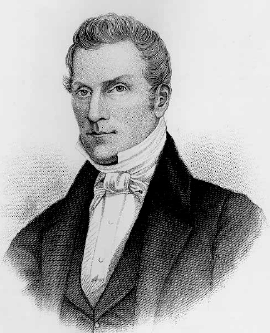 You shall be as firm as the pillars of heaven unto the end of your days. I now seal upon your head the patriarchal power and you shall bless this people. This is my dying blessing upon your head, in the name of Jesus, . . . Amen” 6.

“He lived so far beyond the ordinary walk of man, that even the tongue of the vilest slanderer could not touch his reputation. He lived godly and he died godly, and his murderers will yet have to confess, that it would have been better for them to have a millstone tied to them, and have been cast into the depths of the sea, and remain there while eternity goes and eternity comes, than to have robbed that noble man of heaven of his life.” 7

Unfortunately—at least unfortunately for Oliver Cowdery, who was called to this wonderful and responsible position, jointly associated with Joseph Smith holding all the authority and presidency in this dispensation—Oliver, in a spirit of rebellion and darkness, turned away. He lost his fellowship in the Church, the power of the priesthood was taken from him, and for a season he stood excommunicated from the Church. Fortunately he eventually overcame this spirit of darkness and humbly came back and received his membership in the Church, but never again was he privileged to receive the keys of power and authority which once were placed upon him.

My grandfather, the Patriarch Hyrum Smith, was called to hold the keys of this dispensation jointly with the Prophet Joseph, his younger brother. The Lord has said that in the mouths of two witnesses shall all things be established.

. . . That this testimony of witnesses might be continued and made complete, the Lord chose another to take the place of Oliver Cowdery, and that other witness was the Patriarch Hyrum Smith. By revelation through Joseph Smith, Hyrum was called and ordained to the priesthood and standing once held by Oliver Cowdery. Hyrum Smith received a double portion, not only was he called to become the Patriarch of the Church, which was his birthright, but at the same time the Lord said to him:

“And from this time forth I appoint unto him that he may be a prophet, and a seer, and a revelator unto my church, as well as my servant Joseph;

“That he may act in concert also with my servant Joseph; and that he shall receive counsel from my servant Joseph, who shall show unto him the keys, whereby he may ask and receive, and be crowned with the same blessing, and glory, and honor, and priesthood, and gifts of the priesthood, that once were put upon him that was my servant Oliver Cowdery;

“That my servant Hyrum may bear record of the things which I shall show unto him, that his name may be had in honorable remembrance from generation to generation, forever and ever.”

In accord with this calling and commandment, the Prophet Joseph Smith conferred upon Hyrum Smith all the keys, authority and gifts of the priesthood which he, the Prophet, held, and which were formerly held by Oliver Cowdery. The Lord also revealed to Hyrum Smith all that was necessary to make him completely and to the full degree, a witness with his brother Joseph, as a prophet, seer, revelator and president of the Church, and to stand through all time and all eternity at the head of this dispensation with his brother Joseph, a witness for Jesus Christ. 9

The sealing of the testimony through the shedding of blood would not have been complete in the death of the Prophet Joseph Smith alone; it required the death of Hyrum Smith who jointly held the keys of this dispensation. It was needful that these martyrs seal their testimony with their blood, that they “might be honored and the wicked might be condemned.” 10

“If ever there was an exemplary, honest, and virtuous man, an embodiment of all that is noble in human form, Hyrum Smith was its representative.”  11 “And again, verily I say unto you, blessed is my servant Hyrum Smith; for I, the Lord, love him because he loveth that which is right before me, saith the Lord” (D&C 124:15).

Documentary History of the Church

“There was Brother Hyrum who took me by the hand—a natural brother. Thought I to myself, Brother Hyrum, what a faithful heart you have got! Oh may the Eternal Jehovah crown eternal blessings upon your head, as a reward for the care you have had for my soul!”12

“I could pray in my heart that all my brethren were like unto my beloved brother Hyrum, who possesses the mildness of a lamb, and the integrity of a Job, and in short, the meekness and humility of Christ; and I love him with that love that is stronger than death, for I never had occasion to rebuke him, nor he me.” 13

“No mortal man who ever lived in this Church desired more to do good than did Hyrum Smith, the patriarch. I have it from the lips of my own sainted mother, that of all the men she was acquainted with in her girlhood days in Nauvoo, she admired Hyrum Smith most for his absolute integrity and devotion to God, and his loyalty to the prophet of God.” (In Conference Report, Oct. 1920, p. 84.)

Now, as you have asked, behold, I say unto you, keep my commandments, and seek to bring forth and establish the cause of Zion.

Seek not for riches but for wisdom; and behold, the mysteries of God shall be unfolded unto you, and then shall you be made rich. Behold, he that hath eternal life is rich.

Verily, verily, I say unto you, even as you desire of me so it shall be done unto you; and, if you desire, you shall be the means of doing much good in this generation.

Behold, thou hast a gift, or thou shalt have a gift if thou wilt desire of me in faith, with an honest heart, believing in the power of Jesus Christ, or in my power which speaketh unto thee.

Thou shalt live <to> do  the work which the Lord shall command thee: thou shalt hold the keys of this minis try, even the presidency of this church, both in time and in eternity. (reference from email before (Blessing from Joseph Smith Sr., 9 December 1834)