“There is a swelling movement within the Church, though, that prefers to believe that the story took place in Illinois, among other North American locales.  …‘Prophecies and Promises: The Book of Mormon and the United States of America’ is the latest salvo in this argument. …When and if such features begin to shift, the impulse discernible in the Heartland Model is only likely to grow stronger.”  – Seth Perry – History of Christianity PhD candidate, The Martin Marty Center for the Advanced Study of Religion, University of Chicago Divinity School, Full article

Copyright © Written by Rod Meldrum, The Scriptural Basis for the Heartland Model 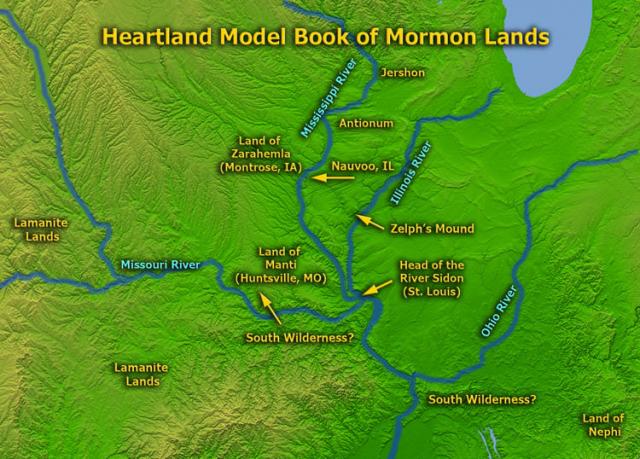 Many proposed Book of Mormon geography theories were originated using a method proposed by Dr. John Sorenson and others who taught that the first step was to create a hypothetical or “internal” map using the 500+ geography related passages.  This has lead to more than 150 different proposed geographies.  The book was not written for its geography, but for its prophecies.  Can we learn more about its geography through its prophecies than we can by speculating using hypothetical maps? Following is a brief synopsys of the scriptural basis for the Heartland Model geography of the Book of Mormon.

2 Nephi 1:5 speaks directly of a “land of promise” that is “choice above all other lands” that the “Lord God hath covenanted with me should be a land for the inheritance of my seed.”  What was the “covenant” spoken of?  This covenant land was given by the Lord to the House of Israel for their latter day gathering place.  There are only two “Promised Lands” mentioned by Christ in the Book of Mormon, Jerusalem of the Old World (see 3 Nephi 20:29) and New Jerusalem of the New World (see 3 Nephi 20:22).  The New World Promised Land would be the location of the gathering place for the House of Israel in the America’s.  Where is this gathering place?  It will be at the New Jerusalem.  And where is the New Jerusalem going to be located?  We know through revelation that the New Jerusalem will be built in Jackson County Missouri, in the Heartland of North America (D&C 84:1-4).  Did the Book of Mormon history take place on the same land as the New Jerusalem?  Multiple passages establish that Lehi’s family was lead to and remained on this Promised Land throughout their entire history (1 Nephi 13:30, 22:7, 2 Nephi 1:5, 3 Nephi 20:22, 21:2-4,21:22-23, Ether 13:2-6).  Therefore the land the Nephites, Jaredites, Mulekites and Lamanites lived upon was their “covenanted” land of promise and must by covenant include the Heartland of North America because it is the revealed location of the New Jerusalem by the Lord Himself.

These prophecies are clearly making reference to the establishment of the United States of America on what was then the Nephite land of promise.  This is the only nation wherein the Lord raised up men “for the very purpose” of its establishment (D&C 101:80) so that the gospel could be restored again to the earth as so many ancient (3 Ne. 21:22) and latter-day prophets have prophesied and testified (D&C 10:53).  The Lord Himself stated that the New Jerusalem, which we know by revelation will be built in Missouri, USA, would be built on these same lands (3 Ne. 20:22, Ether 13:2-6, D&C 57:1-3).  These lands are the sacred sites of events throughout history and prophecy, from the Garden of Eden and the restoration, to the New Jerusalem and Adam-ondi-Ahman.  These are all New World sacred sites, and all of them are located within what is now the nation of the United States of America.

The discussion above, because it is entirely scriptural prophecy based, is undeniable.  This is simply a very robust scripture chain and it does not promote any one theory, but scripturally indicates that the promised land of the Nephites is the same land as where the future New Jerusalem will be built, which has been absolutely established through revelation to be in what is known as the “Heartland” of North America.  Therefore the Book of Mormon lands had to have been located here.  Would Christ’s statement make any sense when he said that “this people (the Gentiles) will I establish on this land (the land of the Nephites) and it (this land) will be a New Jerusalem (3 Nephi 20:22), if those lands were located in Japan, Russia or Central or South America?  No, simply because it has been revealed that the New Jerusalem will be built in North America and will never be on those lands, therefore those lands cannot have been the primary lands of the Book of Mormon.