Age of the Universe, Age of an Eternity

Some feel that the universe was created at approximately the same time as the earth. Others speculate that the universe is 13.75 billion years old. With Latter-day revelation, we understand that the Father has created worlds without number, and many of these are earths which are inhabited by the Father’s children 1. Joseph Smith had access to the papyri upon which Abraham had written some of his knowledge of the age of the universe. Apparently, this system of Creation (not the earth) in which the Father has been Presiding and the Son has been Organizing is 2.555 billion years old. Elder Bruce R. McConkie has taught:

Eternal progression consists of living the kind of life God lives and of increasing in kingdoms and dominions everlastingly. Why anyone should suppose that an infinite and eternal being who has presided in our universe for almost 2,555,000,000 years, who made the sidereal heavens, whose creations are more numerous than the particles of the earth, and who is aware of the fall of every sparrow–why anyone would suppose that such a being has more to learn and new truths to discover in the laboratories of eternity is totally beyond my comprehension.2

Without overstepping the bounds of propriety by saying more than is appropriate, let us say this: God the Almighty; the Maker and Preserver and Upholder of all things; the Omnipotent One; he by whom the sidereal heavens came into being, who made the universe and all that therein is; he by whose word we are, who is the Author of that life which has been going on in this system for nigh unto 2,555,000,000 years; God the Almighty, who once dwelt on an earth of his own and has now ascended the throne of eternal power to reign in everlasting glory; who has a glorified and exalted body, a body of flesh and bones as tangible as man’s; who reigns in equity and justice over the endless billions of his spirit children who inhabit the worlds without number that roll into being at his word—God the Almighty, who is infinite and eternal, elects, in his fathomless wisdom, to beget a Son, an Only Son, the Only Begotten in the flesh.God, who is infinite and immortal, condescends to step down from his throne, to join with one who is finite and mortal in bringing forth, “after the manner of the flesh,” the Mortal Messiah.3

We have an authentic account, which can be accepted as true, that life has been going on in this system for almost 2,555,000,000 years. (see footnote). Presumably this system is the universe (or whatever scientific term is applicable) created by the Father through the instrumentality of the Son. 4

All of the prophets who have seen within the veil have known many things that were never preserved and passed on to their posterity and to the residue of men. Joseph Smith and the early brethren in this dispensation knew much that we do not know and will not know until we attain the same spiritual stature that was theirs. This matter of how long eternity has been going on in our portion of created things is one of these matters. The sliver of information that has been preserved for us is found in an epistle of W. W. Phelps, written on Christmas day, 1844, and published to the Church in the Times and Seasons. Brother Phelps speaks of “Jesus Christ, whose goings forth, as the prophets said, have been from of old, from eternity,” in what is a clear allusion to Micah’s prophecy that Bethlehem shall be the birthplace of our Lord. “Out of thee [Bethlehem Ephratah] shall come forth unto me that is to be ruler in Israel; whose goings forth have been from of old, from everlasting.” the Lord said through that ancient prophet.5 Then, in an interpolative explanation of what is meant by “from eternity,” or “from everlasting,” Brother Phelps says, “And that eternity [the one during which Christ’s doings have been known], agreeable to the records found in the catacombs of Egypt, has been going on in this system [not this world], almost two thousand five hundred and fifty-five millions of years.”6 That is to say, the papyrus from which the Prophet Joseph translated the Book of Abraham, to whom the Lord gave a knowledge of his infinite creations, also contained this expression relative to what apparently is the universe in which we live, which universe has been created by the Father through the instrumentality of the Son. The time mentioned has no reference, as some have falsely supposed, to the period of this earth’s existence.7

According to Bruce R. McConkie, we are reaching the end of this eternity or 7000 years on the Lord’s time of Creation. Note that One day to the Lord (Kolob time) is equal to 1,000 years of time according to this earth891011. Therefore, one year on the Lord’s time is 365000 of our years.Therefore 7000 years of the Lord’s time is 2.555 billion years. Again, this number comes from 1000 (Number of earth years per Kolob day) * 365 (Number of days in one year) * 7000 (Lord’s Creation Years). We do indeed live in the last days. The important points on this are first, that we know very little today compared with the knowledge that Joseph Smith, Abraham and the other ancient Prophets had on these matters; and second, the Lord Created the Heavens and the Earth to be signs. They were created with precise times and with complete order to testify of God. They were not created by random chance. 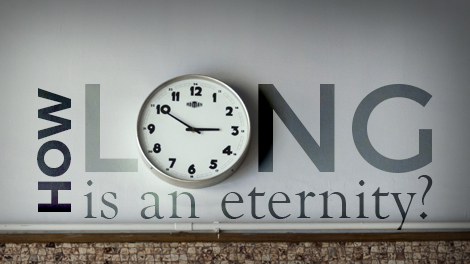