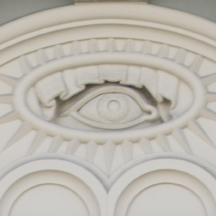 The all seeing eye was defined as “the all searching eye of the Great Jehovah” by President Brigham Young and Elder Orson Hyde.1  This symbol is believed to represent the omniscience of God and His ability to perceive all things.   The Heavenly eye can be found depicted in many LDS structures including the St. George and Ogden tabernacles,2 the original ZCMI logo and was even included in the architectural drawings for the Nauvoo Temple.3 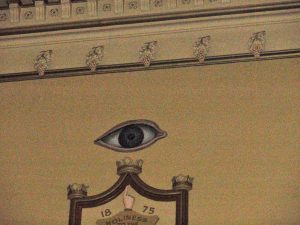 Two all seeing eyes are engraven on the exterior of the Salt Lake Temple, one on the east and another on the west.  Each of the emblems are shown peering out from a veil.  The east veil has a tassel, perhaps to remind the Saints that they are marked as a covenant people and must keep the commandments.  The House of Israel in ancient times also wore tassels for a similar reason.4 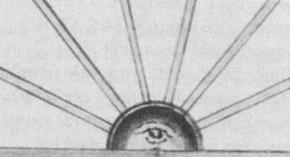 In addition to the Salt Lake Temple, the original drawings for the Nauvoo Temple show that plans had been made to include the all seeing eye in the large semicircle windows.5 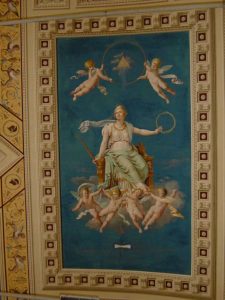 The symbols employed by Joseph Smith and Brigham Young as part of the Restoration were used throughout the history of the earth.  Some see the all seeing eye as Satanic or originating from the Illuminati, a secret conspiracy society founded in 1776. This is easily disputed, as historians believe this symbol was included on early Jewish amulets and seals and later depicted on historic Christian art. 6

Some historians believe that the All-seeing eye was used by the Egyptians, the Babylonians, the Assyrians and possibly sewn into an Egyptian monastery curtain from the 5-6 century.  The All Seeing Eye is also included in another prominent location, one constantly visible to every American. 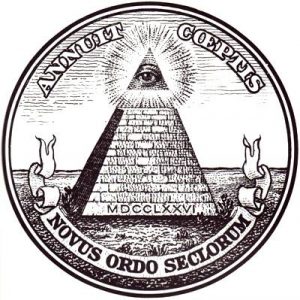 Great Seal of the United States

The Great Seal of the United States is filled with symbolic design.  It contains the all seeing eye surrounded by the words “Annuit Coeptis”.  This motto was chosen by Charles Thomson, the seal’s final designer.  Charles Thomson himself stated, “The Eye over it [the pyramid] and the motto Annuit Cœptis allude to the many signal interpositions of providence in favor of the American cause.” This reminder of God’s providence was also included on the first currency of our new nation.

The All Seeing Eye can also be found on North American artifacts which date to the time of the Nephites.